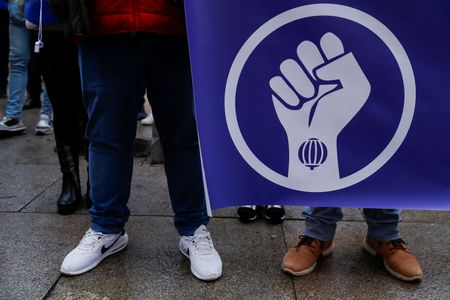 By Guillermo Martinez and Vincent West

MADRID (Reuters) – Lucky lottery players popped champagne corks across Spain on Wednesday afternoon as the winning numbers in a multi-billion euro Christmas draw were revealed, even as some ticket sellers protested to demand higher commissions on sales.

Known as ‘El Gordo’ (The Fat One), the festive draw dates back to 1812. Millions participate, eager for a piece of a large prize pot that this year reached 2.41 billion euros ($2.72 billion).

As the same numbers can be sold multiple times, winning tickets are often spread across different winners in different regions, with this year’s top prize landing in Madrid and the Canary Islands.

A local handball team in the Basque town of Basauri, just outside Bilbao, handed out some 120 tickets that each scooped the second prize worth 1.25 million euros, though most of them will be split among many owners.

The club president told local media around 1,200 people in the community would get a share.

“I haven’t processed it yet. I was in the mountains with the dogs,” said Jose Manuel Fernandez, who had a share in one of the tickets. “My wife didn’t believe it, she began to scream … We’re not used to winning.”

In the months leading up to the draw, in which a larger number of smaller prizes are also distributed, many Spaniards club together to buy tickets or fractions of them, often favouring particular vendors or numbers.

“You always think you might sell it, then it happens,” he said, before spraying champagne outside his concession.

But not everyone was in high spirits. Some sellers walked off the job in protest at the 4% commission they get on Christmas tickets, compared with 6% on other draws, leaving them struggling to make ends meet, they say.

“It’s been 17 years that we’ve received the same commission,” said Natalia de la Fuente, 31, the daughter of a lottery seller.

“Prices go up, taxes go up and the commissions remain the same … This is impossible.”

She joined dozens of chanting protesters outside Madrid’s Teatro Real, where the draw takes place.

Inside, pairs of schoolchildren picked the winning numbers and sang them out to an enthusiastic crowd sporting extravagant costumes, ranging from Santa’s elves to the pope.