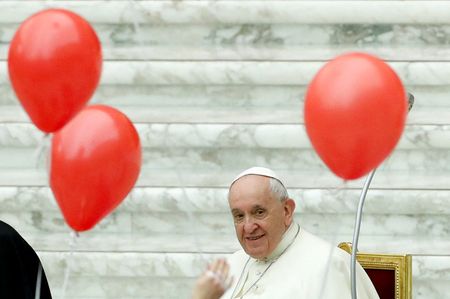 In his message issued on Tuesday for the Roman Catholic Church’s World Day of Peace, which is celebrated on Jan. 1, Francis also called for a better balance between a free market economy and the need to help the needy and protect the environment.

He dedicated about a third of the four-page message to education, saying there had been a “significant reduction” in education and training spending worldwide while military expenditure had increased beyond the levels at the end of the Cold War and “seem certain to grow exorbitantly”.

He did not give any sources for the statistics.

“It is high time, then, that governments develop economic policies aimed at inverting the proportion of public funds spent on education and on weaponry,” he said in the message, which is sent to heads of state and international organisations.

“The pursuit of a genuine process of international disarmament can only prove beneficial for the development of peoples and nations, freeing up financial resources better used for health care, schools, infrastructure, care of the land and so forth,” he said.

The proportions of military and education spending differ from country to country, but positions on what to increase and what to cut often follow partisan lines.

Francis has called for disarmament, a ban on nuclear weapons and has said that military funds should also be diverted into the fair distribution of COVID-19 vaccines and research to prevent future pandemics.

“Despite numerous efforts aimed at constructive dialogue between nations, the deafening noise of war and conflict is intensifying. While diseases of pandemic proportions are spreading, the effects of climate change and environmental degradation are worsening, the tragedy of hunger and thirst is increasing,” he said in the message.