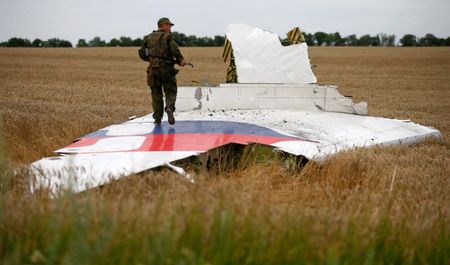 AMSTERDAM (Reuters) – Dutch prosecutors on Tuesday said three Russians and a Ukrainian were ‘fully responsible’ for shooting down Malaysia Airlines flight MH17 over Eastern Ukraine in 2014 and should be found guilty of murder.

The men – all of whom remain at large – could face sentences of up to life imprisonment if found guilty of helping to supply the missile system used by Russian-backed rebels to fire a rocket at the passenger jet as it flew from Amsterdam to Kuala Lumpur.

“The four suspects together are fully responsible for shooting down flight MH17, which caused the death of the 298 people on board, and the murder of those on board,” prosecutor Thijs Berger told judges.

In the second day of presenting their closing arguments, the prosecution said the evidence showed that the suspects — Russians Oleg Pulatov, Sergey Dubinsky and Igor Girkin and Ukrainian Leonid Kharchenko — pulled the strings in the area where MH17 was shot down.

The four were identified by a special international Joint Investigative Team which looked into the crash of flight MH17 and were later named by Dutch prosecutors.

According to prosecutors, the men, who are all linked to Russian-backed rebel groups, made the shooting down of MH17 possible by arranging for a Russian-made Buk missile to be brought to the area.

Under Dutch law it does not matter that the suspects did not ultimately pull the trigger, because someone who makes someone else commit a crime can be convicted as a perpetrator of that crime, prosecutors said.

A sentencing demand is expected on Wednesday at the end of the 20-month trial.

None of the defendants were present in court. One suspect, Pulatov, has sent lawyers to represent him. The others have never cooperated with the court and are being tried in absentia.