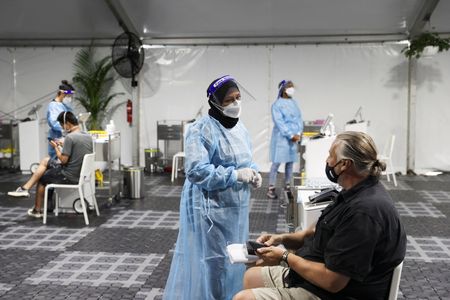 SYDNEY (Reuters) – Australian authorities urged a “move away from fear” of the coronavirus on Monday, resisting calls to make masks mandatory indoors and limit the numbers of patrons at Sydney venues, even as new COVID-19 infections lingered near records.

Despite the threat from the more transmissible Omicron variant, life returned to near normal in Sydney last week, with almost all tough curbs lifted ahead of Christmas, as vaccination rates rank among the world’s highest.

“There will always be new variants of this virus,” said Dominic Perrottet, premier of the most populous state of New South Wales.

“The pandemic is not going away and we need to learn to live alongside it,” he told reporters in Sydney, the state’s capital. “We need to also move away from fear and move to hope and confidence.”

While Omicron’s rapid spread across Europe forced a lockdown in the Netherlands and could bring tighter measures elsewhere, Australia is pushing to ease curbs despite a predicted surge in infections, hoping inoculations will help keep people out of hospital.

More than 90% of those older than 16 have been immunised in Australia.

Perrottet hoped the higher vaccination levels would limit the numbers admitted to hospitals, a figure he urged everyone to focus on.

Although experts have called for tough curbs to be reinstated, Perrottet said he was “taking a balanced and proportionate response”.

No new deaths were recorded on Monday, despite the surge in infections, with hospitalisation rates far lower than at the peak of the Delta wave.

Australia’s tally of 255,000 infections and 2,146 deaths since the pandemic began is far lower than that of many nations.