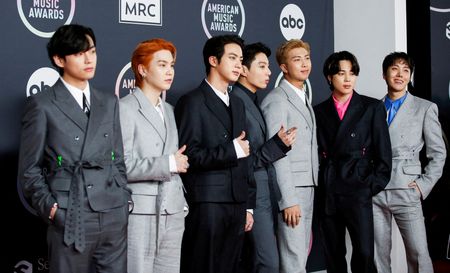 Rapper RM, 27, and vocalist Jin, 29, were diagnosed with COVID-19 a day after Suga, a songwriter and rapper for the seven-member group, tested positive.

All three had completed second doses of a coronavirus vaccine in August, the company said.

Since their 2013 debut, BTS have spearheaded a global K-Pop craze with catchy, upbeat music and dances, as well as lyrics and social campaigns aimed at empowering young people.

The concerts in the United States were BTS’ first in the country since 2019, when they toured across Asia, Europe and North America.

RM, who tested positive as he prepared to leave mandatory quarantine, is showing no symptoms, Big Hit Music said.

Jin tested negative a second time as he left quarantine, but was later diagnosed after experiencing symptoms, which the company said were mild.

Neither Jin or RM had any contact with other group members after their return to South Korea, the company said.