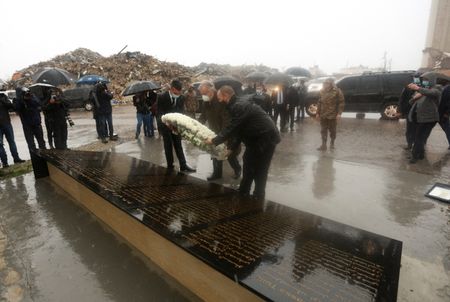 BEIRUT (Reuters) -U.N. Secretary-General Antonio Guterres on Monday said Lebanon needed proper accountability for the August 2020 Beirut port explosion and that elections due to be held next year could usher in political stability in the troubled country.

His comments followed a meeting with Lebanese House Speaker Nabih Berri and a visit to the port, where he laid a wreath at a memorial for the more than 215 people killed when chemicals stored at the port for nearly seven years exploded.

The blast 16 months ago was a strong blow to a country already crushed by an economic meltdown described by the World Bank as one of the world’s worst since 1850.

Many Lebanese are looking to elections scheduled for the spring of next year to challenge the political establishment they hold responsible for the crisis and the blast.

Guterres said he had received a “guarantee” from Lebanese leaders that the elections would be held and said they could create “new political stability for the future.”

Guterres, who arrived on Sunday, has also called on Lebanon’s politicians to work to address an economic crisis that has left four in five Lebanese poor.

“Lebanese political leaders do not have the right to be divided and paralyse the country,” he said.

Prime Minister Najib Mikati’s government has not met for more than two months amid a push by parties close to powerful politicians charged in connection with the blast to remove the judge leading the investigation.

The blast has been widely blamed on the corruption and dysfunction normalized by a political elite that has been in power since the end of the 1975-1990 civil war.