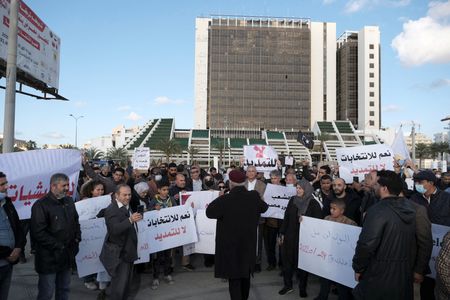 BENGHAZI, Libya (Reuters) – Western powers said on Friday they would continue to recognise Libya’s interim government after its presidential election was delayed, but called for a new polling date to be swiftly set.

The fate of the interim Government of National Unity (GNU), which was installed in March as part of a U.N.-backed peace process has become a main source of disagreement in the fallout over the collapse of the election.

The election was part of a U.N.-backed initiative that also involved setting up an interim government earlier this year as a step towards ending the decade of chaos and violence since the 2011 NATO-backed uprising against Muammar Gaddafi.

Earlier this week, Libya’s parliament said Friday’s planned presidential election would not go ahead, leaving the internationally-backed peace process in chaos and the fate of the interim government in doubt.

The electoral commission proposed pushing back the voting date by a month, confirming a delay that had been widely expected amid disputes over the rules, including the eligibility of several divisive candidates.

However, there is no wider agreement yet on the Jan. 24 date the commission proposed and the disputes over the election’s legal basis and fundamental rules remain unresolved.

Libya’s parliament said in September it would not recognise the GNU beyond Dec. 24, but the statement by France, Germany, Italy, Britain and the United States said it should stay in place.

The statement pointed to agreements at an international meeting last month to say power would not be transferred until after the results of the elections were announced.

The British embassy later tweeted that it continued to recognise the GNU and would not endorse any attempt to set up a breakaway government.

The parliament, which was elected in 2014 and sided with eastern forces in the civil war, has set up a committee to propose its own roadmap forwards.

Libyans voiced anger at the delay to the presidential election that was planned for Friday, as factions and political leaders tussled over the perilous path ahead.

In Benghazi, Wahbi Tarkhan, 81, said he and his wife had both registered for the election and were disappointed by the collapse of the process.

“We were eagerly waiting for this day in our minds,” he said.

Meanwhile the United Nations has been in touch with members of a political dialogue that last year produced the existing roadmap that created the interim government and called for simultaneous parliamentary and presidential elections.

U.N. special adviser Stephanie Williams said on Thursday that during meetings across Libya she had consistently heard people voicing a desire for elections.

“I call upon the concerned institutions to honour and support the will of the 2.8 million Libyans who registered to vote,” she said.

Any fresh effort to resume the electoral process will have to weigh the dangers inherent in a delay against the risks of again attempting an election without consensus on the rules.

Libya’s last election in 2014 was the trigger for rival eastern and western factions to split apart into warring parallel administrations.

Musa al-Sulaimani, who has registered to stand for the parliamentary election, said he felt very frustrated by the delay.

“This was something the Libyan street resented,” he said.