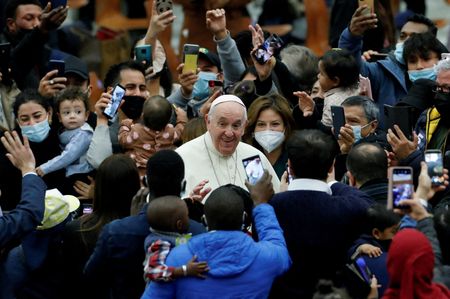 The studies, based on academic, scientific, United Nations data and other source material, were produced by the Vatican’s development office and the Pontifical Academy for Life.

“Reports of violence, abuse, and exploitation of children have sharply increased since the pandemic began. Poorer communities disproportionately bear these adversities,” one of the studies said.

They said that as of September, more than five million children were estimated to have lost a parent, custodial grandparent or secondary caregiver to the pandemic. This translated to a child losing a parent or caregiver every 12 seconds.

The pandemic reversed an encouraging trend in poverty reduction, plunging 150 million more children into poverty and increasing the number of children in child labour to 160 million.

Rising food insecurity led to between six and seven million new cases of acute malnutrition in children under five, translating to about 10,000 deaths a month in 2020, 80 percent of them in South Asia or Sub-Saharan Africa.

Child malnutrition was also increased by the loss of some 39 billion school meals, which even in some developed countries are the only good meal they receive.

The rate of dropping out of school was increasing significantly in the global south and an estimated 10 million children worldwide may never return to school.

Child marriages were increasing as the poorest of families sought to relieve financial pressures.

The studies called for the equitable distribution of COVID vaccines, which Pope Francis has championed, more government spending on children, and keeping schools open as much as possible.